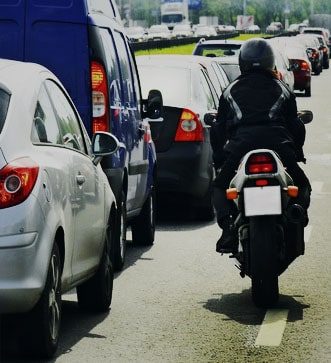 Lane-splitting or (“lane sharing”) is when a motorcycle travels faster than traffic during congested road conditions in the unused space between two lines of moving or stopped vehicles. Sometimes this is referred to as “lane sharing” or “riding the line.”

Lane-splitting seems like a big gray area in California. Generally, riders believe lane-splitting is legal and do it all the time. However, many motorcyclists in California get tickets for lane splitting. Even worse, riders get in collisions because car drivers don’t watch for motorcycles in heavy highway traffic. The problem is there isn’t a single, specific law to clarify this issue. So is lane-splitting legal? Sort of.

The most direct, relevant statute on lane-splitting is California Vehicle Code (CVC) section 21658, which states that a motorcyclist or vehicle shall be driven within a single lane and shall not be moved unless done with reasonable safety. That law settles the debate, right? Not quite.

The California Highway Patrol (CHP) and Department of Motor Vehicles (DMV) are agencies that police and regulate the roadways. Both the CHP website and DMV driver handbook state that a motorcyclist can “split lanes” when done in a “safe and prudent manner.” So lane-splitting is legal in California, but what is “safe and prudent?”

CVC section 22350 makes it unlawful to operate a vehicle at a speed which is unreasonable for the given traffic and roadway conditions, so the general rule is 10 miles per hour over the existing traffic is unlawful. That means if traffic is completely stopped on the freeway, you can legally lane-split up to about 10 miles per hour. However, this gives extreme discretion to the CHP officer to ticket a rider who they believe is riding too fast, not ‘safe and prudent,’ for the conditions.

Even if lane-splitting is legal, be aware that some drivers dislike lane-splitting riders. In fact, I’ve heard of drivers who willfully threw open a door or swerved in front of a rider to block them from lane sharing. This is completely illegal, but it helps to know why drivers get angry.

Have you ever been in a long line only to find there was an open line next to you that you didn’t see? Then did you watch in disgust as others came from behind you and exited through the shorter line? Maybe you thought, “Hey, wait a minute! I was here first! I should be in that shorter line!” Even if you didn’t like it, the late-comers had every right to enter the empty line, and you shouldn’t be mad at them for seeing the empty line that you didn’t see.

If you’ve been in this situation you know how a car driver feels when they see you pass beside them as they suffer the torture of rush hour when their highway becomes a parking lot. While you have the right to carefully lane-split at a safe and prudent speed, many car drivers resent riders utilizing an opportunity denied to them. Guess what type of people are usually jurors in the courtroom. That’s right…Drivers! Believe it or not, some riders are denied justice by jurors/drivers who take out their resentment on the rider in the courtroom.

Attorney Tim O’Connor, on the other hand, would never let a biased juror prevent you from the justice you deserve. If you were involved in a collision while lane-splitting, call today to discuss your specific case.

Since 1990 The O'Connor Law Firm has achieved results for clients in and out of the courtroom. We have offices in Northern California, Southern California, Nevada, and South Lake Tahoe. Call us at (916) 234-6221‬ or send us a message to find out how we can help you.